You are here: Home \ Posts \ News \ Save your money

Israeli banks contribute to apartheid by funding the colonization of Palestine. These banks offer financial services, including mortgages to people who like to buy a house in a colony. The banks also provide loans to businesses which build those houses and the related infrastructure. Moreover, these banks financially assist corporations which exploit Palestine’s natural resources. 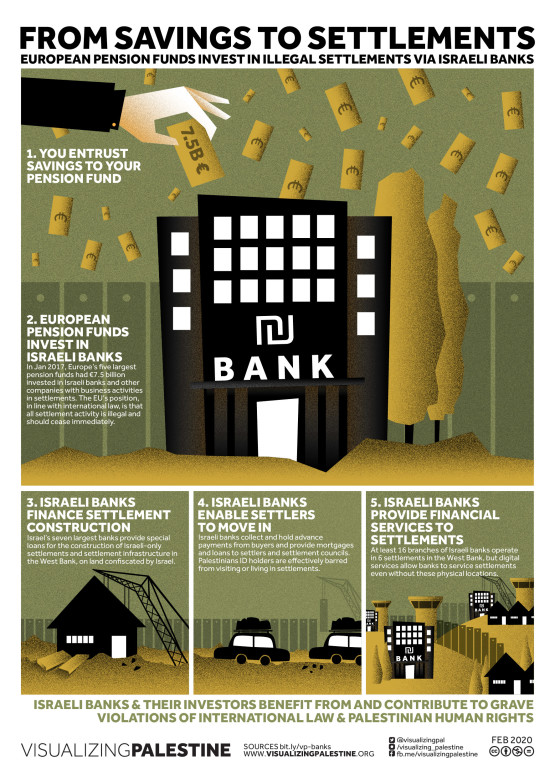 These services make the Israeli colonization of Palestine possible. European investors such as the Dutch ABP pension contribute to the colonization by investing in Israeli banks. These investors could better save their money for something good.

On 12 February 2020, the United Nations Human Rights Council published a report which listed 112 international companies which contribute to the settlements, wich are in fact colonies.

In this report the UN recognized the role of the Israeli banks. It mentions: (f) Banking and financial operations helping to develop, expand or maintain settlements and their activities, including loans for housing and the development of businesses.

While the release of the database will not, by itself, bring an end to the illegal settlements and their serious impact upon human rights, it does signal that sustained defiance by an occupying power will not go unanswered,” said Special Rapporteur Michael Lynk.

Lynk continued: “…by engaging in trade and commerce with the settlements, the international community sustains their viability and undercuts its own pronouncements”.

Next to the major Israeli banks, the UN list includes the Israel’s national water company Mekorot, which pillages Palestinian water, Tripadvisor, Airbnb and Bookingcom and also the Israeli supermarket chain Shufersal, which runs stores and supply chains in settlements, amongs others.

In 2014, the Dutch pension fund PGGM decided to withdraw its investments in Israeli Bank Hapoalim. Many other funds followed this example.
Unfortunately, the Dutch state pension fund ABP continued their contribution, despite various complaints and warnings that doing so would support the occupation of Palestine and that their support contributes to violations of international war.

Hopefully UN report A/HRC/43/71, which clearly explains the devastating role of the Israeli banks in supporting apartheid, will help ABP and other funds to reconsider their investments and clean up their portfolio.