You are here: Home \ News \ Tripadvisor is heading for UN database

TripAdvisor is an international online platform that promotes travel to all corners of the world, including to illegal Israeli settlements in occupied Palestine. Last week, the Israeli research organization Who Profits published a new report on tourism, highlighting the role of TripAdvisor, Booking.com and AirBnB in promoting the settlements. The report is called Touring Israeli settlements: business and pleasure for the economy of the occupation.

In 2015, I visited the historic site of Qumran and Ein Feshka Nature Park on the Dead Sea. Before going to the destinations, I consulted TripAdvisor. Both Qumran and Ein Feshka are located close to the Israeli settlement of Kalia. Tripadvisor described both locations as an Israeli destination, while in fact they are situated in occupied Palestine.

At the entrance to Qumran, I had to pay an entrance fee. The office was manned by the Israeli Nature and Parks Reserves Authority which issued the tickets. As a result, I found out that the Israeli government manages these sites. After my return I wrote TripAdvisor. I recommended the company that they should not advise their customers on illegal travel destinations or to warn them that they may support a war crime while visiting a settlement. 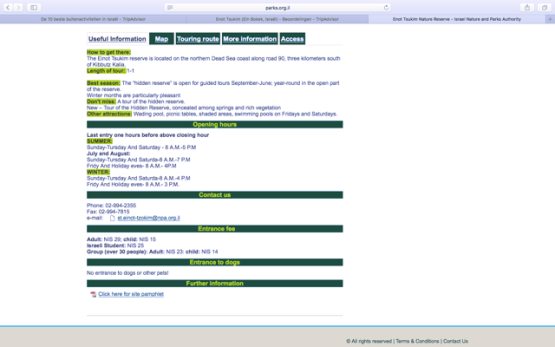 Tripadvisor refused to publish my advice, and for years, several destinations in the illegal settlements were promoted as a holiday destination “in Israel”.

Does TripAdvisor state in the UN database?

By the end of 2016, the United Nations Human Rights Commission (UN) decided to establish a database of Israeli and international companies benefiting from illegal settlements.

Settlements have no legal validity, constituting a flagrant violation under international law. In the definition used by the High Commissioner for Human Rights, the settlements are not just stone buildings, but consist of “all physical and non-physical structures and processes that include the establishment, expansion and maintenance of Israeli residential communities in the Occupied West Bank, including East Jerusalem.”

According to a message in the Times of Israel, TripAdvisor, Priceline, which is the owner of Booking.com, as well as AirBnB may be included in the database.

Again, on September 8, 2017, I wrote the travel agency about Ein Feshka. Three weeks later, shortly after the UN sent official letters to 150 companies which might be included in the UN database, I received a TripAdvisor response. Spokesman James Kay wrote the following:

“… We have searched for Enot Tsukim’s geographical location and identified an unintended error for the location mentioned below. This is now being repaired and Enot Tsukim is included on TripAdvisor as located on the West Bank, within the Palestinian Territories . This is in line with the standard for the international travel industry. It is important to emphasize that our location or area description policy is geared to the geographical reality of those visiting. Our goal in such situations is to provide geographic information that is useful to people travelling to those areas. ”

Apparently, TripAdvisor thinks that by the inclusion of “Palestine” as the origin of this destination the problem has been solved. But their adjustment is below par. TripAdvisor continues to promote holidays in illegal settlements. So, I answered:

Thank you for taking my concern seriously. At the same time, I note that Enot Tsukim, as you call it, is the Israeli name for the colony, while the Palestinians call it Ein Feshka. See below a screenshot of the Israeli authority that mentions the site as if it is Israeli while it is Palestine. The name of the Ein Feshka site contributes to this recognition.

But what I’m concerned about is that Ein Feshka is exploited as an Israeli colony and is part of the settlements that violate international law and form a war crime. You could compare this resort with Sun City from the dark days of Apartheid in South Africa. Advising travelers to enter such a site does not seem to be compatible with good ethics, if you ask me.

TripAdvisor offers travelers around the world a forum with tips from fellow travelers. This forum is directed tightly. Following insistence, TripAdvisor says it follows standards for the international travel industry, while it continues to publish and promote a holiday in an illegal settlement.

The UN Guiding Principles on Business and Human Rights report that all companies, regardless of size, sector or structure, are required to comply with applicable laws and to respect human rights.

But TripAdvisor ignores international law and denounces its responsibility.