You are here: Home \ News \ We will not bow for intimidation, says Shawan Jabarin, director al Haq

With intimidation, false accusations and threats, Israel tries to silence Palestinian human rights organization Al-Haq. But director Shawan Jabarin is determined to hold Israel to account for its violations of the rights of the Palestinian people. I discussed Al-Haq’s cooperation with the International Criminal Court and the need for sanctions against Israel during Jabarin’s visit to the Netherlands last month.

“If the criminals don’t pay the price for their crimes, if they feel they enjoy impunity, they will repeat their crimes again and again,” says Jabarin. Therefore, Al-Haq cooperates with the International Criminal Court (ICC) in the Hague on Israel’s international crimes committed against the Palestinians. 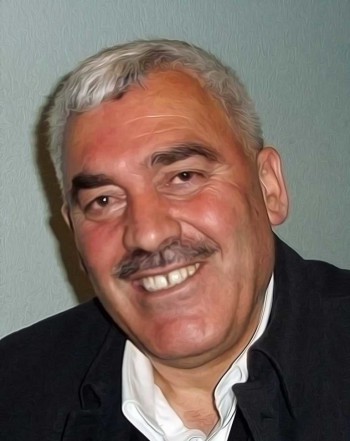 Jabarin is convinced that this is why Israel attacks and smears his organization, hacks emails, spreads false accusations of corruption, and threatens its employees with death.

Al-Haq is targeted because “we provide information to the ICC,” says Jabarin. “The Israelis have exhausted all their efforts to push Palestine not to accede to the ICC. They know well they can’t challenge our information because we built it on credible resources, we used high professional standards of documentation. They have this fear from our professional legal work. They feel that our work helps the ICC  to go after Israel. That is the reason to attack our colleague in The Hague.”

Jabarin says with a penetrating gaze: “The Israelis think they can get everything by force. They got Palestine by force, but they can’t silence everyone by force. They can’t silence the defenders of international law in the Netherlands who are fighting for justice, equality and human rights. They use sophisticated techniques with an old-fashioned content: revenge, hate, discrimination, superiority. They have not entered yet the modern mentality of justice, human rights, rule of law, equality and freedom.”

The attacks on Al-Haq are not unique. Palestinian and Israeli rights organizations, Human Rights Watch, Amnesty International, the BDS movement, organizations and governments who support human rights groups, all encountered smears and false accusations by the pro-Israel lobby.

Different groups are behind the attacks, says Jabarin, “rightist groups in different countries, mainly in Europe. And there is also a very organized official campaign by the Israelis, like the Ministry of Strategic Affairs led by minister Gilad Erdan. They have millions of dollars to carry out campaigns against those who are working for accountability, who stand behind the international law principles, who are fighting for justice. They fight against those who exercise their freedom of speech by calling for BDS.”

Intimidation and threats are used “to distribute fear among staff members, activists and officials, just to build self-censorship in every mind: to count  to 100 not ten, before they address Israel’s crimes. They use the media, international relations, intelligence and other methods. They use rightist groups abroad like gangs. They use modern technology for character assassination. They push false information on the internet, every day, every hour, every minute.”

Future of the youth

Jabarin is concerned about the future of the new generation. Seventy-five percent of the population in Palestine is younger than 29 years and fifty percent is younger than 17. Al-Haq connects its promotion of respect for international law with the future of the Palestinian youth.  “The fundamental question is: which track do we want the new generation to take.  Do we want them to feel that there is the rule of law or that there is the law of the jungle?”  In the law of the jungle “there is no rule of law, no respect for international law, no values of democracy, equality and human rights.”

“This is a dangerous message to our society. It will also affect the world. We want to remind people of their responsibilities, to take the peaceful way of addressing things and getting rights.”

“They have fundamental rights to participate in public and political life and to choose their representatives,” Jabarin adds. “This is a message to the Palestinians but also externally to show this is an important step. The leadership in Palestine expired. The young generation feels that no one represents them and they lost their hope with their leaders. It should be done in a transparent democratic way. If we engage with the youth in that way I think we protect the future of the young generation.”

In response to Israel’s ongoing grave breaches of international law and ignoring UN resolutions, Al-Haq calls for economic, political and diplomatic sanctions. From day one Israel declared it will not respect Security Council resolution 2334 which demands that Israel immediately terminates all settlement activities in Palestine, including East Jerusalem. Instead, Israel announced the construction of many thousands of new settlement homes.

According to the UN Charter and the Security Council, the UN should “activate the sanctions committee to look at the Israeli practices, policies and crimes,” says Jabarin. “We are not naïve. We know there is no political will, but in the end we have to push for that.”

The UN and states act in a selective way, Jabarin observes. When Russia annexed the Crimea several states responded with sanctions in just a few weeks. “After Israel occupied Palestine it annexed East Jerusalem and the Golan Heights in 1967, no one did anything. In the case of the Crimea they reacted according to the law. The question is why not in the case of Palestine? This the main issue.”

The European Union tries to differentiate between Crimea and Israel, says Jabarin. The EU told Al-Haq that the annexation of Jerusalem happened a long time ago and that Israel has not annexed Palestine. “They want to wait to see a de jure or formal annexation, but in reality Palestine is annexed. It just needs to be formalized.”

The Israeli political community “agrees they don’t need to formalize the annexation because the reality on the ground is that they annexed it. They do what they want. A formal annexation will bring another responsibility on their shoulders. They enjoy everything as if Palestine is part of their land.”

It is the role of human rights organizations to remind everyone of their responsibilities and legal obligations. “After 50 years of occupation it’s not the time for more words, condemnations and resolutions.” What is needed is “to activate, implement and respect these resolutions, principles and values. It is a long time… 70 years is a very long time.”