Swiss lawmakers are rolling back a measure targeting the boycott, divestment and sanctions (BDS) campaign for Palestinian rights.

On 8 March, the National Council, the lower house of the Swiss parliament, passed an anti-BDS bill put forward by the right-wing People’s Party. But now the foreign affairs committee of the upper house, the Council of States, has stripped all references to BDS and the Middle East from the text. The upper house will debate the amended measure in May. 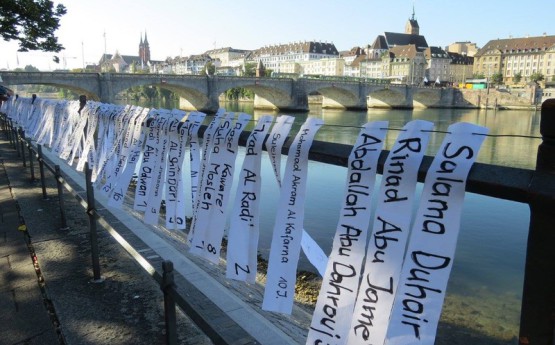 Activists displayed the names of Palestinian children killed during Israel’s summer 2014 attack on Gaza in cities across Switzerland, September 2015 (via Facebook).

The motion passed by the lower house urges the government to ban any funding to nongovernmental groups “implicated in racism, anti-semitism, incitement to hatred or BDS campaigns.”

Last month, Palestinians protested against the measure outside the Swiss diplomatic mission in the occupied West Bank city of Ramallah.

NGO Monitor, a far-right group that targets and smears supporters of Palestinian rights, welcomed the March vote and claimed credit for “providing details on the Swiss government’s funding of organizations that propagate anti-peace, anti-normalization, BDS and one-state policies.”

But the foreign affairs committee of the upper house ruled that the wording of the lower house bill was “unwise” and proposed striking “any geographical or political indicator explicitly referring to the conflict in the Middle East.”  By a vote of 12-0, the committee adopted new wording that eliminates any reference to BDS.

The amended motion calls on the government to review its funding regulations and make any changes necessary to ensure organizations involved in “racist, anti-Semitic or hate-motivated actions” are excluded.

But since the entire measure appears to have been motivated by efforts to thwart the Palestine solidarity movement, rather than any real concern about racism, it seems unlikely that any changes will follow.

Roman Vonwil, a member of the activist group BDS Switzerland, told The Electronic Intifada his organization is “glad the foreign affairs committee did not accept the attempt to defame the BDS movement with false accusations of anti-Semitism.”

“Defending fundamental rights has nothing to do with anti-Semitism,” Vonwil added.

NGO Monitor provided the People’s Party with a list of human rights and humanitarian organizations that supposedly spread hate about Israel.

But Swiss foreign minister Didier Burkhalter said no changes to the law are needed and sufficient safeguards and accountability already exist. “Switzerland does not support organizations that incite hatred or racism,” Burkhalter told parliament. “It does not associate with BDS-type movements.”

Israel and its surrogates have supported legislation and government crackdowns on BDS activists in several countries. Last year, the Dutch parliament also voted to review aid to organizations supporting the Palestinian-led BDS movement. NGO Monitor claimed its briefings to parliamentarians were crucial to the vote. But the Dutch government refused to exclude BDS advocates from receiving aid.

Switzerland now joins the European Union, Ireland, the Netherlands and Sweden in resisting pressure to outlaw or ostracize BDS as a tool to defend the rights of the Palestinian people.