You are here: Home \ News \ How Booking.com is aiding Israels warcrimes

Two years ago, I wrote an article exposing how Booking.com was offering hotel rooms in settlements that Israel has built in violation of international law. I also highlighted how the travel website was misleading clients by giving “Israel” as the address for hotels in the occupied West Bank and Golan Heights.

A correction of sorts has been made since then. When I checked Booking.com earlier this month, I learned that it now gives “Israeli settlement” as the address for some of its accommodation listings.

The change was more than likely made in response to European Union guidelines. Yet that does not alter the fact that Booking.com is still abetting Israel’s settlement activities – activities which constitute war crimes. 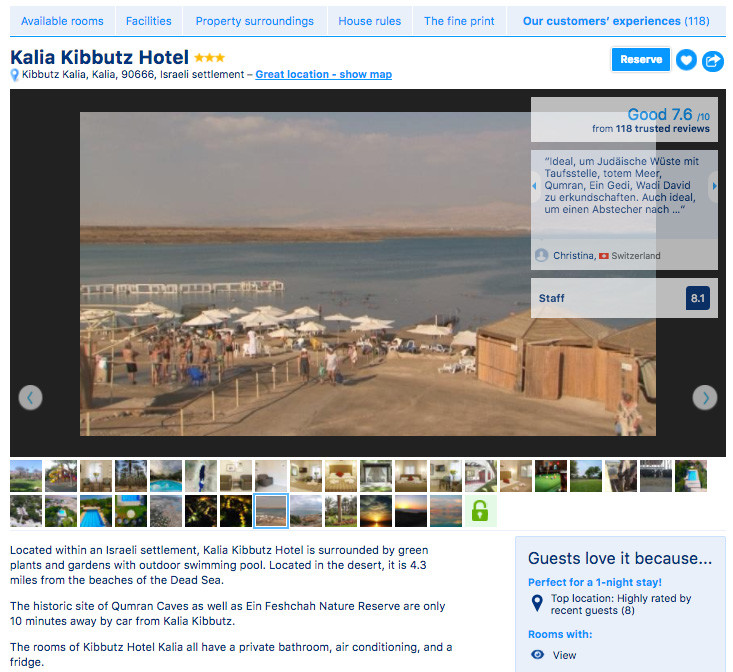 Take the Kalia Kibbutz Hotel. In 2015, Booking.com claimed that this hotel was in Israel. Today, the website states that it is “located within an Israeli settlement.” It would not be clear to anyone unfamiliar with Middle East geography or politics that the hotel is situated on occupied Palestinian land.

Booking.com does not elaborate on what exactly “located within an Israeli settlement” means. It does not specify that the settlement has been built in violation of international law.

Unsuspecting tourists may simply think that the hotel is in an attractive location, a short drive from the Dead Sea.

The photographs of manicured lawns and a spacious swimming pool would not alert prospective visitors that by reserving a room here, they would be entering the scene of a war crime.

A 2013 United Nations report defined settlements as encompassing “all physical and non-physical structures and processes” built or undertaken to install, expand or maintain “Israeli residential communities” outside the “Green Line” – the boundary between Israel and the occupied West Bank and Gaza Strip.

Hotels located within Israeli colonies would appear to fall within that definition, as they are contributing economically to tourism activities in the settlements.

Other listings by Booking.com are arguably even more deceptive.

The website gives “Israel” as the address for accommodations in occupied East Jerusalem. This is despite the UN Security Council viewing Israel’s annexation of East Jerusalem as a violation of international law.

For example, Booking.com offers its clients the opportunity to book chalets in Ramot, an Israeli settlement in East Jerusalem. The website claims that the chalets are in Israel, without acknowledging that they are located in an illegal settlement.

Booking.com is headquartered in the Netherlands. It should, therefore, abide by Dutch and European Union law.

In November 2015, the EU published guidelines for firms doing business in the Middle East. They state that the Union “does not recognize Israel’s sovereignty over the territories” it has occupied since 1967 – the West Bank (including East Jerusalem), Gaza and the Golan Heights – and “does not consider them to be part of Israel’s territory.”

The guidelines add that information published by firms about the origin of the products they sell “must be correct and not misleading for the consumer.” Labeling a product from an Israeli settlement in the West Bank, including East Jerusalem, as being “from Israel” would be misleading, according to the guidelines.

While the guidelines focus on goods, rather than services, there is nothing in them to indicate that hotels should be exempt from their provisions. Giving “Israel” as the address for East Jerusalem clearly runs counter to what the guidelines stipulate.

Besides offering settlement hotels in the occupied West Bank, Booking.com is continuing to claim that the Rimonim Hermon Holiday Village is in Israel. In fact, the holiday resort is actually situated in the Golan Heights, an Israeli-occupied part of Syria.

Booking.com has not gone far enough by only partially complying with these guidelines.

All of Israel’s settlements in the West Bank, including East Jerusalem, and the Golan Heights contravene the Fourth Geneva Convention, which prohibits an occupying power from transferring its civilian population into territories that it occupies.

As the construction and expansion of Israel’s settlements involve war crimes, the EU should not simply be telling companies to use appropriate terminology. Rather, it should be banning the sale of goods and services to and from those illegal colonies. The EU should do so, mindful of how the UN has, in effect, defined businesses within those colonies as settlement activities.

Two years ago, Booking.com tried to evade its responsibilities. A spokesperson for the firm told me it was “not up to us” to determine if Israeli settlements were “illegal, disputed [or] unrecognized.”

The corporation did not respond to more recent requests for comment. Danwatch, a Copenhagen-based research center, recently criticized the Priceline Group – the parent company of Booking.com – for refusing to address the “possible negative effects on human rights” from listing hotels in Israeli settlements.

Jeff Handmaker, a law lecturer at Erasmus University in The Hague, insisted that “companies cannot be disconnected” from their obligations under international law. Handmaker argued that under the Dutch international crimes act, Booking.com could be sued for enabling violations of international law. By continuing to offer services in illegal settlements, “Booking.com is – deliberately or not – actively facilitating the commission of war crimes,” he added.

The only acceptable course of action is for Booking.com to refuse all listings from Israeli settlements in the West Bank, including East Jerusalem, and the Golan Heights.

Nobody should be invited – knowingly or not – to holiday in an illegal destination.

This article has been first published on 22 February 2017 on Electronic Intifada.