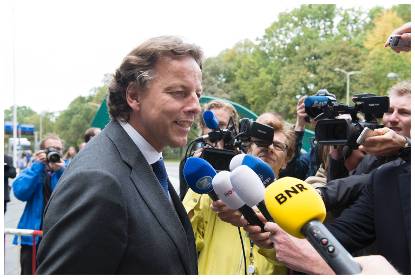 The Dutch government has rejected calls to cease funding organizations that advocate a boycott of Israel.

In June this year, NGO Monitor – a lobby group with close ties to the Israeli political and military establishments – claimed it had scored a significant victory in the Netherlands.

NGO Monitor was referring to a decision made by the Dutch parliament that a review should be undertaken of the country’s aid to organizations supporting the Palestinian-led boycott, divestment and sanctions (BDS) movement. According to NGO Monitor, the parliament’s vote was the result of briefings that the lobby group had provided on how “radical” activists were engaged in the “demonization” of Israel.

The government in The Hague has now made it clear, however, that it will not bar BDS advocates from receiving aid. Doing so would not be conducive towards ensuring “healthy relationships between the government and civil society,” Bert Koenders and Lilian Ploumen, the ministers for foreign affairs and development aid, have jointly stated. Their comments were made in response to queries by a committee in the Dutch parliament that has been studying what action should be taken following the June vote. That vote was not legally binding.

The two ministers also rejected calls for BDS activities to be punished on the grounds that they involved “discrimination” against Israel.

According to the two ministers, “human rights, including the prohibition of discrimination, aim to explicitly protect individuals [and] groups of individuals.” Such protection does not apply to states, they added.

“On the basis of freedom of speech it is allowed to call on a government to take sanctions against another country,” they added.

The Netherlands has long been perceived by Israel as an ally and the statement by the two ministers is unlikely to alter that perception. Despite the ministers’ willingness to defend the right to advocate boycotts, the Netherlands shares the objective of all EU governments of wishing to boost trade with Israel. Nonetheless, the response from Koenders and Ploumen appears to mark a departure from that taken by previous Dutch governments.

Uri Rosenthal, the Dutch foreign minister from 2010 to 2012, spoke out against the granting of public funds to organizations that defended the rights of Palestinians. Rosenthal promised CIDI, an Israel lobby group, that “intervention will occur in cases of organizations acting against Dutch policy.”

Despite that pledge, the Netherlands has continued to receive complaints from the Israel lobby. NGO Monitor has focused particularly on Dutch financial support for the Human Rights and International Humanitarian Law Secretariat. Based in the West Bank town of al-Bireh, the secretariat provides grants to Palestinian human rights groups, some of which have endorsed the BDS call.

The Netherlands has a long tradition of aiding groups that campaign against oppression and poverty. It is one of only six governments in the world to exceed an international target of devoting more than 0.7 percent of gross national income to development aid.

The latest assurances indicate that Palestinian rights groups will keep on receiving aid from the Dutch government.

This article has been first published on 7 December 2016 at Electronic Intifada.