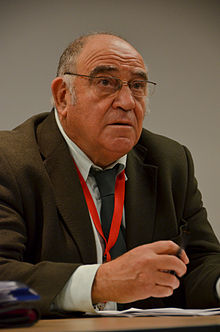 Anti-apartheid veteran Ronnie Kasrils finds attempts to outlaw boycott, divestment and sanctions (BDS) activism against Israel “absolutely ludicrous” and activists should resist such efforts. Last month, I interviewed Kasrils about his views on BDS and apartheid on his visit to Amsterdam.

For decades, Kasrils fought against apartheid as member of the African National Congress (ANC) and the Communist Party. He participated in operations of the ANC’s military wing, Umkhonto we Sizwe. After the fall of apartheid, he served as (deputy-)Minister in several governments.

Kasrils was born in Johannesburg in 1938 as the grandson of Jewish immigrants from Lithuania and Latvia who fled for the Czarist pogroms to South Africa at the end of the 19th century.

“It worked brilliantly,” Kasrils quickly responds to my question if BDS against the South African apartheid regime made an impact.

“BDS made the whites in South Africa very angry. But you wear them down with BDS. It got to a point that they could not bear it anymore and then they wanted to see a change.”

A member of the ruling National Party told Kasrils that Barclays decision – after a presence of over 150 years – to withdraw from South Africa in 1988 “was the last straw that broke the camel’s back.” He recalls that international BDS activism started with a consumer boycott of South African fruit like Outspan oranges, grapes and apples. In the 70’s, Peter Hain in Britain started to disrupt sports games. With a group, he went down to the tennis court in Bristol and stopped the South African team. “It caught on like wildfire and reached other countries.” The boycott was open to creative interpretation and became an important way of reaching out and pulling people in.

Then pension schemes of churches and trade unions around the world began to divest from South African companies or companies that invested in South Africa. It had a big effect.

In 1985 in America, Kodak workers became aware of the extent to which black South Africans were suffering. The African-American people became instrumental in the anti-apartheid mobilization. Through their senators and representatives in congress, the black lobby began to apply huge pressure against companies and banks. Chase Manhattan was the first bank to break ties with South Africa.

Kasrils says that he supports BDS activism against Israel a hundred percent. Attempts to outlaw BDS in the United States, Canada, France and the UK must be resisted, he adds.

“It is absolutely ludicrous that governments should use legislation to close down the right to freedom of speech of people who believe that BDS is a peaceful way to provide assistance and solidarity to the Palestinian people.”

“These governments should be assisting the whole process. Then there will be greater calm and peace for people in Palestine and Israel and the whole Middle East. Israel is a nuclear power with a considerable number of nuclear weapons and with extreme right wing people ruling it. The population is begging for blood, not just Palestinian blood but also from people in the region, and from people like Omar Barghouti who simply are talking about the right to BDS.”

“Israel is a country which exhibits the worst forms of injustice, of killings that we have seen for a very long time. Countries which incidentally are often referred to as fascist.”

Kasrils visited Israel and Palestine several times. When I ask him about his experiences, he answered: ”there are definitely similarities.” In 1984, the Security Council endorsed the definition adopted by the General Assembly in 1966 that apartheid is a crime against humanity. The Apartheid Convention does not say “South African apartheid”, it was made broader, Kasrils observes.

Any South African who has been involved in the freedom struggle and visited Palestine and Israel says “this is just like apartheid,” Kasrils continues. “The separation of people, the measures being used, those queues at the checkpoints, the humiliation are like apartheid.”

Archbishop Desmond Tutu and numerous other people say it is actually worse than apartheid.

“We seldom saw apartheid dropping bombs on people or entering townships with tanks and firing heavy artillery as in Gaza. In South Africa, we have seen atrocious massacres and we had occasions where the state of emergency was declared, the movement of black people controlled, sieges on townships like Soweto. It lasted a few weeks. Not year after year like in the West Bank or Gaza,” Kasrils recalls.

Many people doubt that Israel will change and respect the rights of the Palestinian people.

However, Kasrils is certain that it will change: “Israel is an example of the remaining colonial state, it seized the land from the Palestinian people, it dispossessed them of land and rights, used the most appalling methods throughout Israel’s history. We, South Africans, went through an agonizing process under apartheid. We recognize what is happening to the Palestinian people. We stand full square behind them in solidarity and call on governments to abide by United Nations resolutions. That means: the end of occupation, the end of the siege of Gaza, the right of the refugees to return. The only way in which the Jews of Israel can be guaranteed to live in security is by recognizing the rights of their fellow human beings, the Palestinian people.”

There was a time when people felt that there could be no end to apartheid in South Africa, Kasrils continues. The white state was very strong. It had huge resources and it had backing from the West, including the same countries that are supporting Israel today.

It came unstuck, because the people in South Africa were determined. For making a change one needs unity, determination, good leaders, the correct strategy, a vision for the future. In the end, the outcome for a just course is certain, no matter how long it takes. South Africa proved that.