You are here: Home \ Posts \ News \ No more Ahava for alliance of Dutch pharmacies

Based upon long-term campaigning and research, Article 1 Collective recently found that Alphega pharmacies stopped selling Ahava. Alphega, in which the Dutch Kring Apotheken merged, is a European network of more than six thousand independent pharmacies. Alphega is owned by Alliance Healthcare.

“There is no Ahava on the shelves.”

The spokesperson said that Ahava is no longer being sold, because the products do not sell well. When asked about, the spokesperson acknowledged that she is well informed about the discussions around the Israeli settlement products. She denied that this discussion has been of influence in the decision making. 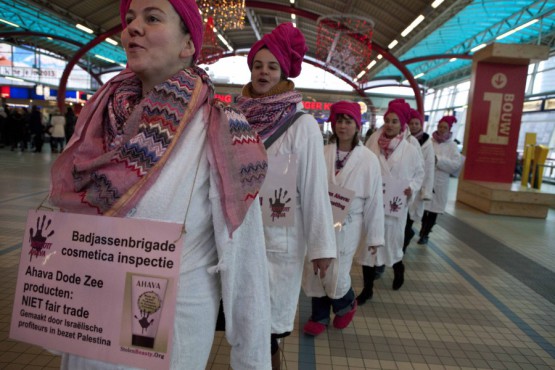 Based upon the Palestinian civil society call for Boycott, Divestment and Sanctions (BDS), several international campaigns started to protest against Ahava from 2009 onwards.

The US based action group Code Pink writes at its website Stolen Beauty that “Ahava promises Beauty Secrets from the Dead Sea. But the real secrets it keeps are an ugly truth — its products actually come from stolen Palestinian natural resources in the Occupied Territory of the Palestinian West Bank, and are produced in the illegal settlement of Mitzpe Shalem”.

In London, Ahava was forced to close its shop after consumers had been protesting against Ahava in 2011.

In the Netherlands, the Bathrobe Brigade, established by a group of young women in 2009, protested in pink bathrobes against Ahava and wrote their criticism to Kring Apotheken.

“We are happy that the sale of Ahava has stopped. We organised a lot of ludic actions to make the objections against Ahava known to the public. Nobody gains beauty from stolen products. Cosmetics should never be produced at the expense of human rights.”

One of the first successful consumers boycotts in history was the Dutch action in 1972 against supermarket Albert Heijn because of its sales of Angola Coffee. “Within 3 weeks that boycott was successful,” remembers Sietse Bosgra (Committee Southern Africa) in the Volkskrant of 24 June 1995.

Article 1 Collective concludes that products from Ahava do not sell well, because of their bad reputation on human rights and international law. Ahava is established in one of the Israeli settlements and exploits Palestinian natural resources, which is illegal under international law and an obstacle to peace.

Article 1 Collective is rejoiced about the fact that more and more consumers are aware of the problems around the Israeli settlements and concludes that consumers increasingly refuse to buy these products.

“This is a positive step. It proves that unlawful acts cannot continue to take place without people raising their voice against it. Besides, the step revives hope that justice will one day prevail”.