You are here: Home \ News \ Kairos Palestine: context and significance

Almost six years ago, Christian Palestinians launched Kairos Palestine – A Moment of Truth, which advocates for ending the Israeli occupation and achieving a just solution to the conflict. The Kairos document is the word of Christian Palestinians to the world about what is happening in Palestine. “Our word is a cry of hope, with love, prayer and faith in God. We address it first of all to ourselves and then to all the churches and Christians in the world, asking them to stand against injustice and apartheid, urging them to work for a just peace.”

Mieke: How did Kairos start?

Rifat: The idea of Kairos is rather an old idea. In the 1980’s, a similar process had unfolded in South Africa under the Apartheid regime, involving the South African churches that openly recognised Apartheid was wrong. We wanted to learn from their experiences.

In 2004, I spoke with some good friends about the negotiations between the PLO and Israel and how we as civil society should be involved in this process, together with the Palestinian churches.

We discussed the idea over and over again until we reached the stage where we wanted to test our ideas. Through some Dutch friends we reached Cyrill Ramaphosa, the former ANC chief negotiator during the peace talks in South Africa in the early 1990s. We asked for a meeting, which he accepted.

Straight from Amsterdam, the PLO delegate went to Geneva without informing anyone and there he joined the launch of the Geneva initiative. We felt this was outrageous. Even after he came back, there was no follow-up, not even a verbal report. So the idea we had then slipped away. 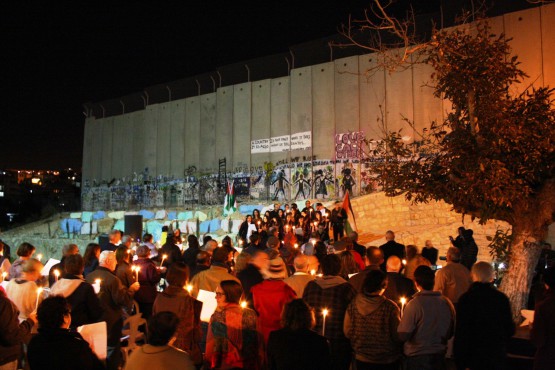 The idea was resurrected in mid 2007. I was working as an advisor on the Middle East for the General Secretary of the World Council of Churches (WCC) in Geneva. At that time, a group of friends and colleagues, among them Harry Derksen and yourself of ICCO, discussed the need for action. You all played an important role in bringing Kairos to life. In October 2007, we shared our ideas with Sam Kobia, then the Secretary General of the WCC, and after our meeting the seed of Kairos was firmly planted.

There were several initiatives and projects which contributed to the creation of Kairos. These included the Ecumenical Accompaniment Programme Palestine-Israel (EAPPI) of the WCC, the Jerusalem Ecumenical office (JEC), the Olive tree campaign and the World Council of Churches meeting in Bern, Switzerland.

Another important step was our initiative to build a national coalition with the Palestinian Christians. Together with Abla Nassar, who was the YWCA General Secretary at that time and Dr. Bernard Sabella, the director of the Department of Service for the Palestinian Refugees, we developed a national coalition for Christian Palestinians. Because of the Israeli military’s movement restrictions, one part was set up in Bethlehem and one in Jerusalem. Via this initiative, a clear and unified Christian voice came up which gave us insights in the Christian community in Palestine. Some communities were living in isolation, but this initiative connected us to each other in the West Bank and even, partly, in Gaza. We contacted all these groups and discovered who was who, and who was doing what. Through this initiative, we identified their problems and challenges and analysed what was needed. From that moment, we understood the need for Kairos.

In 2007, the WCC organised a conference in Amman, Jordan to emphasize the bond between the WCC, the Middle Eastern Council of Churches (MECC) and the local Palestinian and other Arab churches. All Palestinian church leaders attended this meeting and many international churches came to join us. Then and there, in Amman, a call was released and the WCC spoke about a costly solidarity and about necessary concerted efforts from all churches and agencies to end the occupation.

Another milestone in the creation of Kairos which was a trip to South Africa, where I met the authors of the South African Kairos document of 1985. We discussed our Palestinian concept without showing them the text. We just exchanged ideas and after this visit, they visited us in Palestine. They inspired us and gave helpful advice.

In March 2008, we took the process further. We brought Palestinian theologians as well as Arab and international experts together in Geneva, to start a theological discussion about the signs of the time.

Our idea was still too vague at that stage. So, we invited new people for a meeting in Bethlehem: theologians, ordained clergy, lay people, women, young people and activists. We tried to include as many denominations as possible and we asked Head of the Catholic church in Jerusalem, Patriarch Sabah, to start drafting the document. Gradually, and in silence, we produced draft after draft. It took seventeen drafts. The 18th was the last one.

The last weeks before the official launch of the document were essential, because the group entered into deep discussions about the proposed recommendations. We agreed to include our support for the BDS call and to invite all international pilgrims to come and see, to visit us and to talk to us, and to witness the situation we faced for themselves.

Mieke: How did the group embrace the call for BDS?

Rifat: In 2001, the Presbyterians called for a settlement boycott and in 2002 the WCC Central Committee issued a resolution calling for boycott of products from the settlements. So the concept of boycott and divestment became quickly known in church circles.

At the same time, we initiated OPGAI, the advocacy network for Occupied Palestine and the Syrian Golan Heights. In 2005, OPGAI became a founding member of the Boycott National Committee (BNC), which is the umbrella for BDS. So, BDS was not something new to us. Kairos amplified the BDS message towards the churches, as well as to regional and international ecumenical bodies.

Mieke: Can you tell me more about the launch of the call and how Kairos was perceived?

Rifat: On 11 December 2009, we launched the document in Bethlehem.

People from all over the world came to the ceremony. Church representatives from Latin America, Asia and Africa attended the meeting as well as the incoming general secretary of the WCC, Rev. Dr. Olav Fykse. There was a good representation from South Africa; Archbishop Desmund Tutu sent a special envoy. From the Netherlands, we received representatives from the Dutch Protestant Church (PKN) and ICCO.

Immediately after the launch, we received an invitation from ICCO to present the Kairos call in Utrecht, Holland. ICCO translated the call into Dutch. End December 2009, Father Jamal Khader travelled to Holland to convey our message to the churches. This is how it started.

Mieke: How did the Dutch churches react to Kairos?

Rifat: At that time, many general ministries campaigned against settlement products within their churches. Kairos centralised and streamlined this discussion, Instead of coming from each of the separate ministries, now the message came directly from Palestinian Christians to the churches.

The first reaction from the Protestant Church in the Netherlands (PKN) was diplomatic: “ …we have an unbreakable bond with Israel and we see the sufferings of the Palestinians and we pray for peace…” But, it seemed they thought more about it and in January 2010, the Dutch ministry Church in Action sent a letter to the Israeli ambassador in The Hague in which they emphasised the unbreakable bond with Israel, plus the fact that their Palestinian Christian brothers and sisters suffer under the occupation and that Israel has the key to ending their suffering. This letter was immediately attacked by the lobby group CIDI, after which the church stepped back from this message.

Meanwhile, Kairos Netherlands was established. In many countries the Kairos movement influences the churches to divest from companies which profit from the occupation. We know less than 50 percent of what is happening and yet every day we hear about new initiatives, but in Holland there still seems a lot of work to do.

Mieke: Kairos sends a clear message to Christians worldwide: that is the power?

Rifat: Exactly! Kairos brought something which people could adapt to. It unified the voices of our people and sent a clear call to your churches, asking for solidarity and for action.

In December 2014, we celebrated the fifth Kairos anniversary. During these years, we kept strong relations with many ecumenical agencies and churches. However, I emphasise that much more still needs to be done and we need to encourage our allies to take clear steps towards ending the occupation of Palestine.

In the beginning of this century, church-based advocacy in Palestine was nonexistent. Some good donors acknowledged that there was a gap in information sharing and they were ready to invest in us.

Yes, our society faces a lot of problems. This investment from donors came with the acknowledgement that our problems are linked to your side of the globe. A deeper analysis was needed to recognize this. And that is why you need to build your own power and influence to advocate with Kairos back home.

If you want to do something good, you need to give hope to people. That is what Kairos did. Kairos reconnected us, it brought a new vision for the future and gave us hope.